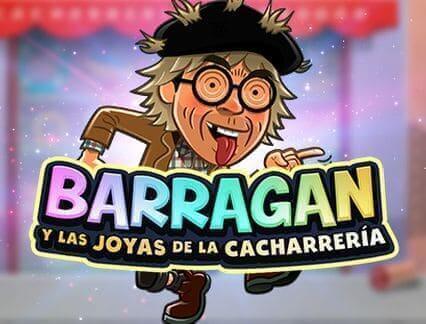 Barragan: Y Las Joyas De La Cacharreria is the first of two branded slot machines released by MGA, a Spanish developer. The basis for its story comes from a character that’s played by a comedian, whose actions are based on a type of absurd humor which proved quite popular over the years. They turned it into a classic slot machine on the reels, but made sure to keep the comedian close-by, as a constant companion along the way.

100%
BTC5
T&C Apply
N/A
N/A
View Terms
Play Now
Read Review
* Make your first deposit today at Cloudbet - in BTC, ETH or BCH - and we'll reward you with a bonus of 100% up to a maximum of five bitcoin, Ethereum and bitcoin cash. Your bonus balance will be automatically released when you make your first deposit and play!

While the game has 3 reels, the features it offers are not the ones you’d expect, being much more evolved compared with the usual classics.

You start playing in the Main Game, where every win that is formed can be collected or risked. If it’s risked, then you either get a bigger prize (the next level on the paytable), or you get a certain amount of Chi Cheno (the main character).

The Upper Game is the version of the game where you want to be, as symbols change, and with them there are bigger payouts offered as well. It turns from a classic slot to a themed one. Same as before, most wins can be risked, provided that you didn’t get the top jackpot, which you just collect.

Nudges and Holds can be used by the player along the way, to manipulate the game area. You either keep one or two reels sticky for the round, or you nudge reels by one position (up to 4 times), in the hopes that a win will form.

Certain symbols may trigger various mini-games. One might give you the Scratch and Win (main game). In the Upper Game, another will offer you a Pottery bonus game, Maria’s Clothes Line or The Park, each one with its own prizes to pay.

Vertical Lines are possible when the Jajajaja symbol lands, giving you 8 lines total for the Upper Game.

Random prizes may come as a result of three random 7s landing together while using a high bet.

Extra wins are paid when you accumulate Horseshoe symbols, and you get enough of them in their special meter.

You get some help along the way from wild symbols, which are available as substitutes, when present next to the right mix of matching symbols.

Finally, you have a button in the bottom right corner, which lets you access the bonus game directly, in exchange for a wager.

Just sign up and enjoy your spins – offers listed below only open to players residing in United States.