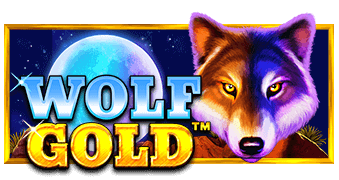 It’s your basic wildlife/American prairie themed slot machine, which just so happens to have the wolf in the main role.

Besides images of the wolf, the full moon or the scatter symbol with the cliffs, there are buffaloes, eagles, wild horses and mountain cats in main roles, while Royals get the lesser positions.

Launched just a couple of years ago, in 2015, Pragmatic Play has more than 100 employees working out of their offices in Malta.

The company is fast becoming a well-known provider of slot machines, and they’ve received awards for their work on several games, as well as for just being a new provider to watch out for.

They’re releasing a lot of new games all the time, and so there is something exciting available at their casinos pretty much each month.

How To Play It

With a betting range that goes from $0.25 to $125, Wolf Gold does the usual thing as far as wagering is concerned. It allows for the same $0.01 to $5 line bet as every other slot machine from Pragmatic Play, and with as many as 10 coins of $0.50 selected in each case.

A game that has 5×3 reels and a total of 25 fixed pay lines, Wolf Gold is fairly easy to figure out. The Spin button, in the bottom right corner, has the wagering options next to it.

It doesn’t act as a substitute for money symbols or scatters, but for others, it’s going to work just fine. Best of all, the wild symbol pays as much as the top jackpot icon, so you get a lot from it, if it manages to create combinations by itself.

Scatters are going to be present as well, and they show up on the 1st, 3rd and 5th reels only. All three are required before you can get to the slot’s 5 free spins. In this mode, the middle three reels are transformed, so that they now show a giant symbol on them (3×3 sized). You can retrigger the feature, and get 3 more rounds, whenever another set of three scatters appears.

Full Moon Money symbols are also going to be present, and quite useful to you. Whenever they appear, they will have values on them, and if 6+ are present, then you get the Money Respin. 3 respins are offered initially, but there is the possibility of getting more.

At the end of the feature, you can get the prizes from either the fixed jackpots or the amounts mentioned on the money symbols.

To note about this game is that the highest RTP setting which the casino will select is 96.01%, but there is also the possibility of going with a figure as low as 88.01%.

It’s not overly original, but it can be an acceptable way of spending some time. Its top payouts and its RTP don’t recommend it as a game to spend time with long-term though.