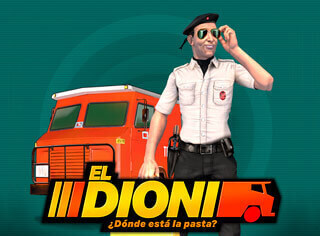 El Dioni is one of several slot machines that MGA has developed for their Spanish Celebrities series, and just like the others, it’s a 3-reel game with a classic layout and modern features. The story is based on a famous robber that stole over 300 million pesetas back in the 80s, though he was caught and imprisoned a few months later. It’s a unique story, and only in this branded release can you find it in slot machine form.

For El Dioni, MGA once again went with a 3-reel setup, along with 1-8 paylines. You play this game with bets between $0.20 and $15, you get a chance at a top prize of $15,000, and along the way you will experience medium volatility. There are 5 different mini-games to trigger, wild symbols, free games, vertical lines, a second game mode, as well as nudges or hold options. The variable RTP, ranging from 80% to 95% depending on the bet value, is the part that manages to ruin it a bit for me.

100%
BTC5
T&C Apply
N/A
N/A
View Terms
Play Now
Read Review
* Make your first deposit today at Cloudbet - in BTC, ETH or BCH - and we'll reward you with a bonus of 100% up to a maximum of five bitcoin, Ethereum and bitcoin cash. Your bonus balance will be automatically released when you make your first deposit and play!

You start playing El Dioni in the main game, which gets 3 reels & 1 payline. As you spin the reels, eventually you will get winning combinations to form, and then you will have a choice to make. You can either collect your winnings, or you can risk them. The risk can result in either an upgraded prize, or in an advance on the bonus meter. Fill up the bells, to get into the Upper Game.

For the Upper Game, the slot delivers the same 3×3 reels, but with 5 to 8 lines and different symbols. The rewards get better as well here. Once again, there is the option to risk winnings, in exchange for a chance at a bigger prize.

The Nudge and the Hold are two options that you get to use, with the former allowing you to move reels by one position, while the latter will hold one or two reels and allow the rest to re-spin. The aim is the same, to get symbols on certain reels, which are required to complete a win.

Among the mini-games which are found inside, two will come in the main game, and three in the upper game. The main game can get the Bags or the Toupee bonuses, via three Bags icons.

For the Upper Game, bonus games will include Meridien (3 Limousine), The Restaurant (3 Restaurant Figures) or Julio (3 Karaoke figures).

Extra features available inside will range from the option to have 8 lines instead of 5 (by adding three vertical lines when the Passport icon lands in the upper game), mixing Seven symbols, or accumulating shells and then getting extra prizes. Add the wild symbol as well here, a feature that’s common in slots, yet quite useful.

Just sign up and enjoy your spins – offers listed below only open to players residing in United States.

El Dioni is quite similar to the other slots in the Spanish Celebrities series, and it has the same pros and cons. I will include the fun graphics and the variety in features when it comes to the list of pros, but at the same time the same very low RTP is used inside, and that’s a huge downside. It’s a game for those willing to use the maximum bet, or for those that are huge fans of El Dioni.